Many encounters are fulfilled in the mysterious winding streets where the houses are touching, they lean toward each other, and are joined by curious bridges forming suspicious tunnels, which are animated with happy or awkward impromptu meetings. The medina of Fes is a crossroad, a perpetual trail of streets, which becomes lost and surprising with the opportunity to find itself again and rediscover the exit.

On arrival we settled into the wonderful Riad Fes, a former palace in the medina that has been restored by Chakir Sefrioui. We penetrated the walls decorated with zeliges (tiles composed by cut pieces and coupled to reproduce geometric patterns), stucco and carved wood.

We observed the vast walled city where mosques minarets arise, most notably that of the Karaouine, the highest one. The voice of the muezzin was sliding on the hills surrounding the city, the sun was setting on the horizon, and the murmur from the medina came up like medieval music. In the hills we could observe the old forts or Borj, the tombs of the Marinid dynasty and in the distance the Middle Atlas mountains were visible. 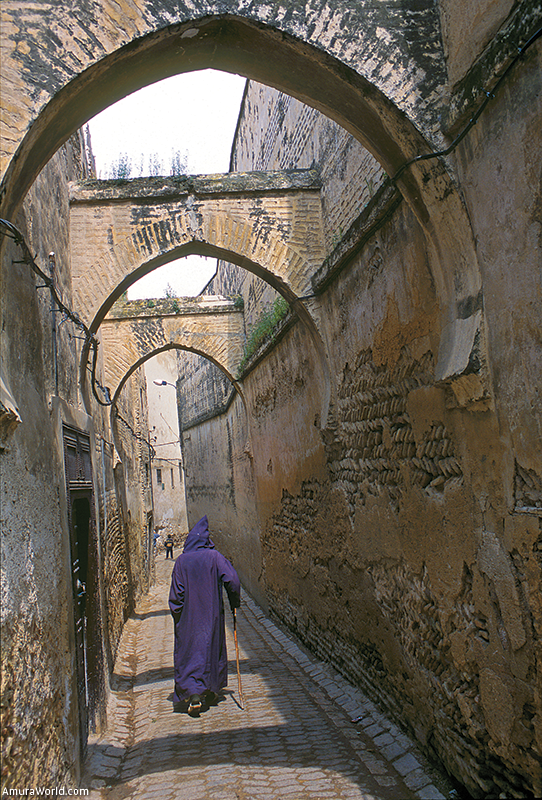 We sat at the bar L’Alcazar with its beautiful columns that line the courtyard adorned with a long fountain, before enjoying a delicious dinner at the restaurant L’Ambre at Riad, a menu designed by Fouzia Sefrioui composed of Basti’la (pie of filo pastry with pigeon and almonds), a tajine of chicken with lemon and olives (cooked in a hat shaped clay pot) and the delicious pastries like gazelle horns and macaroni. Our bodies felt the music vibrate, the echoes of history, the voices of the prayers and the singing of the muezzin, while enjoyed the delicate flavors.

The next morning we went walking with a guide in order to not get lost in these medieval alleys. We begun with the wall that protects the two cities, Fes El Bali (the old) and Fes Jdid (new) and it opens the monumental gates (Bab) to allow access to the enigmatic world of the medina. Bab Boujeloud, decorated in zelig is the blue door which vibrates by the constant transit of people into the two main streets, Tala’a Kbira and Tala’a Sghira, where the shops are located and by which an impressive crowd in perpetual motion passes through.

Fes is a huge chest where the most amazing buildings arise: Nejjarine Museum, a former “fondouk” (caravanserai, station for caravans) with decorated wood next to a beautiful fountain, the Moulay Idriss II Zaouïa, son of the founder’s mausoleum, an important place of pilgrimage, the El Attarine madrassa, built in 1325 with a stylish yard dressed with zeliges, stucco and carved cedar, the Karaouine mosque and university, renowned as one of the best Islamic studies centers, the Tetuan Fondouk, founded in the fourteenth century by the merchants of Tetuan, with its “mucharabie” (lattice) balconies. 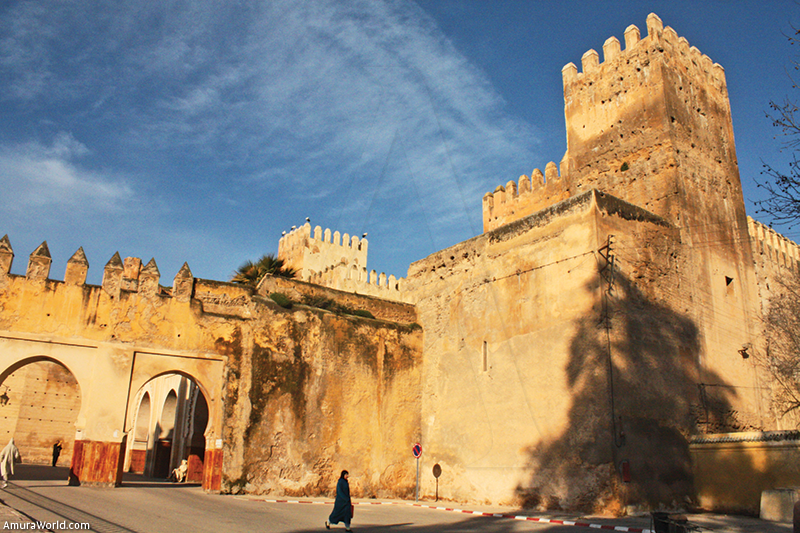 Our third day is dedicated to Fes El Jdid. We entered and walked through the Bab Dekkaken covered alleys to discover the Mellah, the Jewish quarter with its typical windows that open onto the street and the Habarim synagogue. We reached the great Mechouar or square of the palace where official ceremonies and the great events are held, limited by the monumental entrance to Dar El Makhazen (Royal Palace), with its sumptuous entrance beautifully restored with its zeliges, carved bronze doors and green tiled ceilings.

We rested a while in order to enjoy the excellent cuisine in Dar Roumana, served in a beautiful traditional house in Fes. We enjoyed the Harira Moroccan soup with lentils and lamb and beef tajine with prunes and almonds. To finish our day, we visited the potters and discovered their wonderful work that is typical of Fez pottery, famous for over 1000 years.

The next day we left early to Meknes, the imperial city about 65 km, surrounded by its wall that adorns the hill. We discovered Bab Lakhmis and Bab Berdaïne, two richly decorated monumental gates of the seventeenth century, and went to visit the former royal palace Dar El Makhzen which was the palace of Moulay Idriss, founder of Meknes. We continued the visit of Bab Mansour, the imposing and magnificent door decorated with zelig, built in 1732 by Moulay Ismael, and considered the largest in Morocco and North Africa. We visited the Nejjarine mosque dating from the tenth century, the Bouanania madrassa founded in the fourteenth century, which boasts a beautiful courtyard decorated with zelig, finely carved stucco and wood, consisting of 26 classrooms and its prayer room. 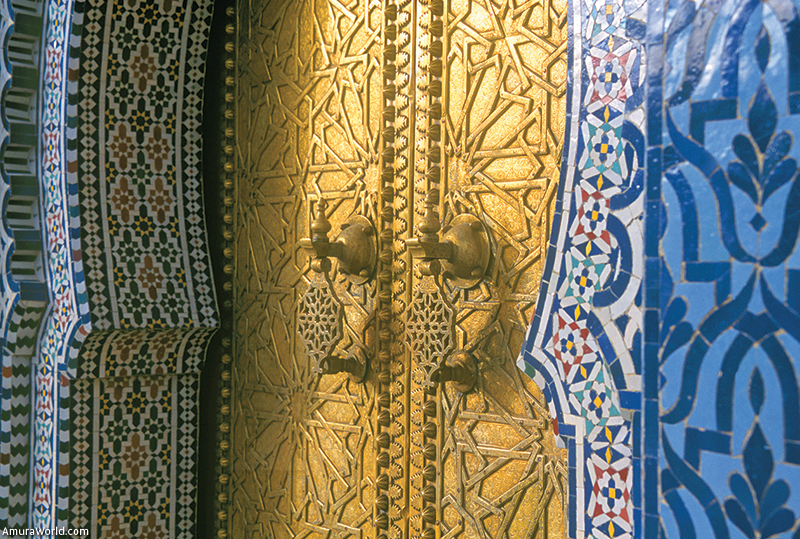 Then we could admire the perfect plan of the city of Moulay Idriss, the wonderful Roman mosaics depicting gods and scenes of everyday life, the triumphal arch of Caracalla, the forum, the basilica and the temple of Jupiter.

We returned to the Riad Fes and dined that night at Maison Blanche, the branch of the famous Parisian restaurant of the Avenue Montaigne by Jacques and Laurent Pourcel.

Waking we decided to discover the hidden gems of the city: Riad Fes is the gateway to the past to live, to feel the pleasure of the sweetness of the Arab environment. Its doors are decorated with nails and the symbol that represents the hand of Fatima for good luck, were opened to us over the mysterious hidden courtyards and gardens. At riad El Mokri (now an arts center), a mysterious doorway led us into the courtyard, which in turn gave way to a beautiful room with few windows that open on a divine view of Fes and its minarets.

Finishing the day we relaxed again in the hammam to feel revitalized and to vibrate to the rhythm of life in Fes, before dining in the Mezzanine, a restaurant-bar where we found the Fes’ jet set, with a delicious meal and a fascinating ambiance. Then we decided to visit the Vip and Felix clubs to discover the nightlife of traditional Fes.

Fes has given itself to us and opened their secret gardens and enchanted palaces. Its endless alleys with noisy, colorful, crowded and lively markets were an enigma to us. Fes is illustrated with an Arab proverb, “from a distance you are reached by the eyes of him who fulfill the desires”. 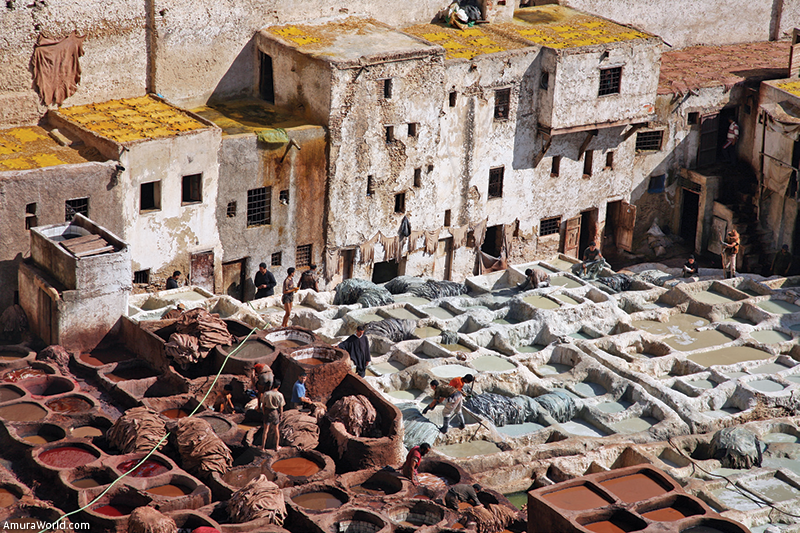 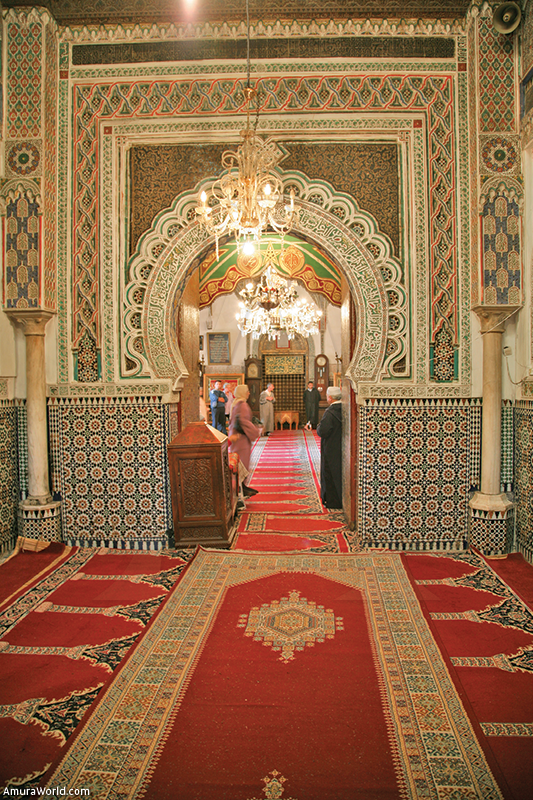