Pharaohs in Search of Conquering Navigation 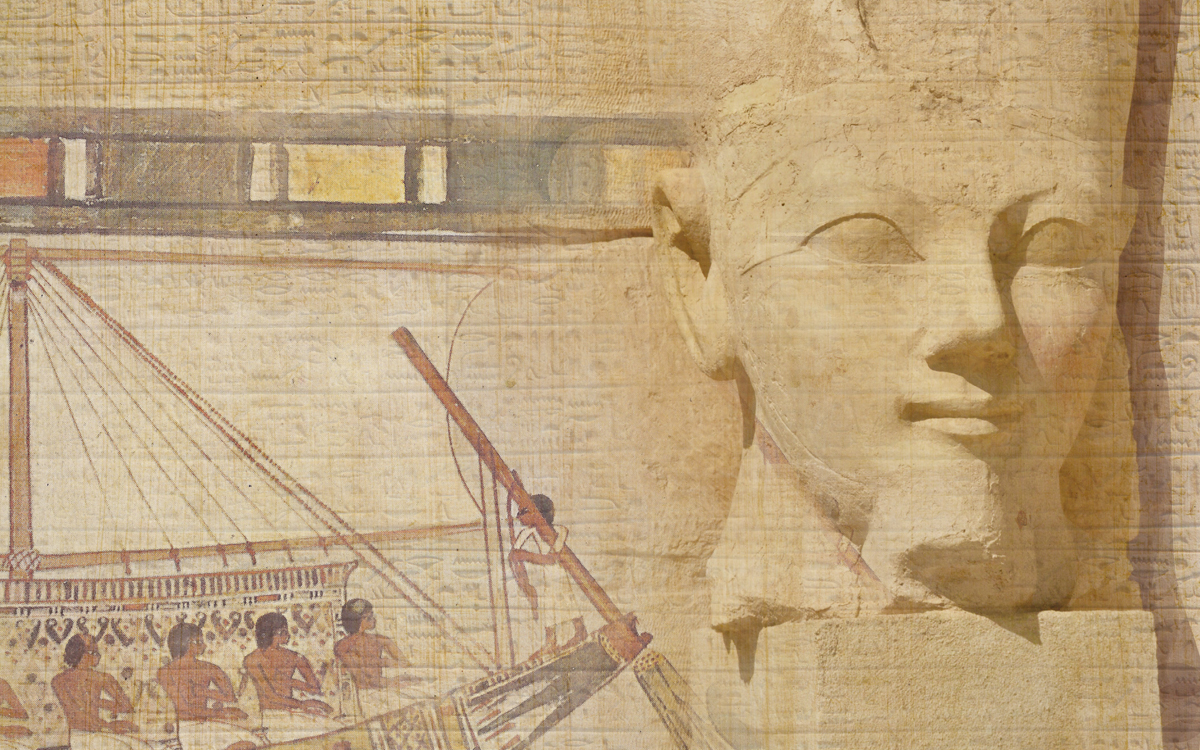 “To sail is necessary; to live is not necessary”

Primitive men used any floating object to travel small distances in bodies of water close to their settlements. There is a belief that it was the ancient Egyptians who crafted the first man-made vessel, which has been described as a canoe carved from the trunk of a tree. Some time later they discovered how to take advantage of wind patterns to propel their ships by inventing a navigational tool that has been preserved to the present day: sails. Egyptians used papyrus canvases to make them.

Archaeologist Kamal el-Mallakh found one of the most remote evidences of Egyptian navigation in 1954, which is exhibited at the Giza Solar Boat Museum in Egypt: the remains of the funerary—or solar—boat of Pharaoh Khofu (Cheops in Greek) of the Fourth Dynasty (2547 - 2524 BC). The ship was found completely disassembled in 1,224 parts: cedar wood boards and oars, halfa grass ropes, wooden dowels and slats, as well as copper staples. Eventually the boat was rebuilt, and research confirmed that it was indeed used to navigate; it is also believed that it only cruised the waters of the Nile. Its measurements: 43.4 m in length, a beam of 5.6 m and a 1.5 m draft. 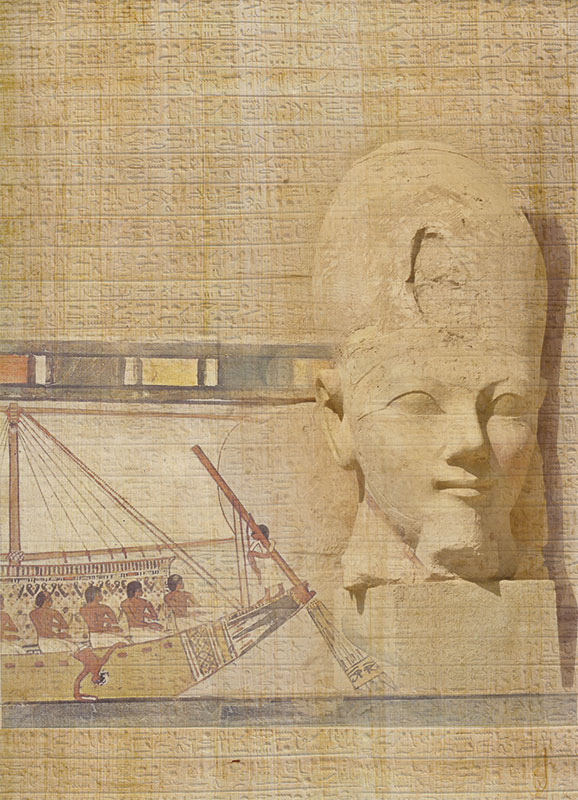 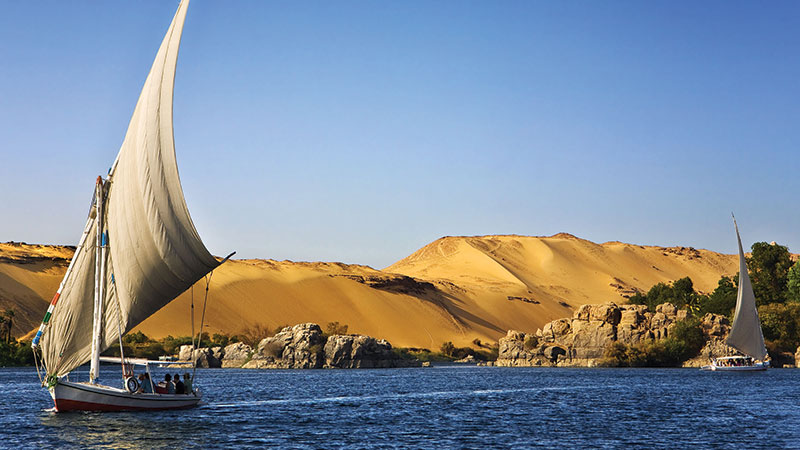 The history of ships began with the ancient Egyptians and their sailing ships.

The first historical account of large-scale maritime trade also dates back to this civilization, attributed to Pharaoh Sneferu (2650 BC), whose memory has survived to this day through the Palermo Stone, where there is an inscription that reads: “bringing of 40 ships filled with cedar wood,” and refers to two maritime expeditions he organized to Byblos (today Lebanon).

There is a pictorial reproduction of a ship in the Mortuary Temple of Pharaoh Sahure (2550 BC), who was another great precursor of navigation when he shipped his army on a fleet to Asian shores. This pharaoh is credited with the first voyage to the mysterious Land of Punt. 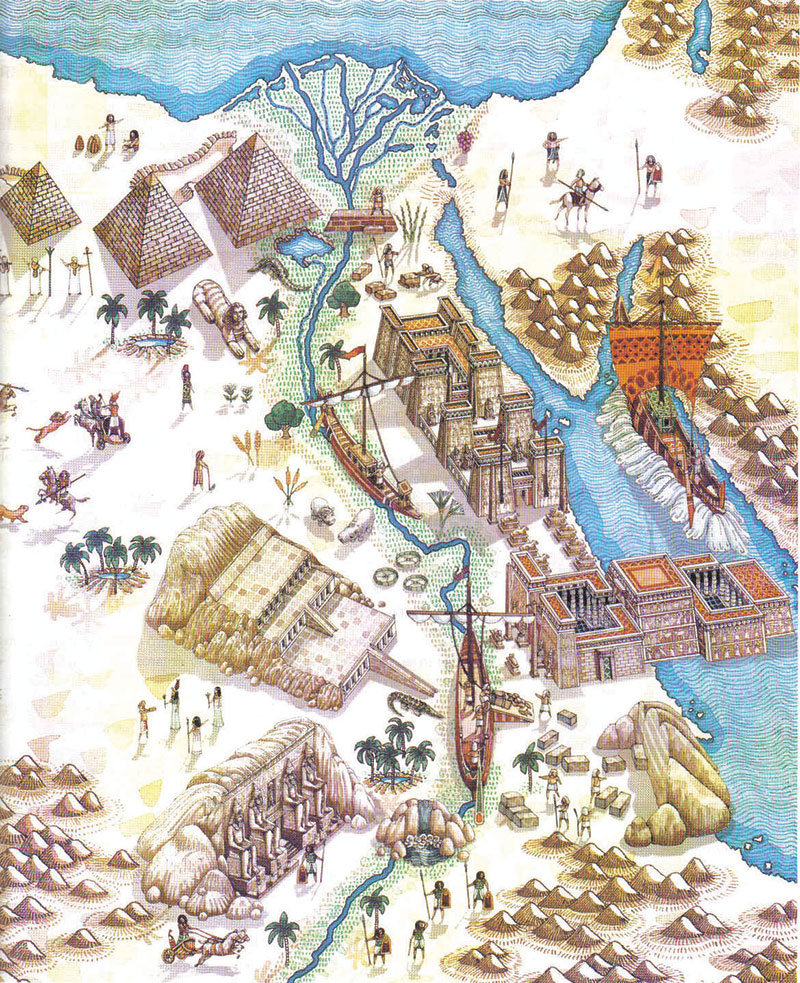 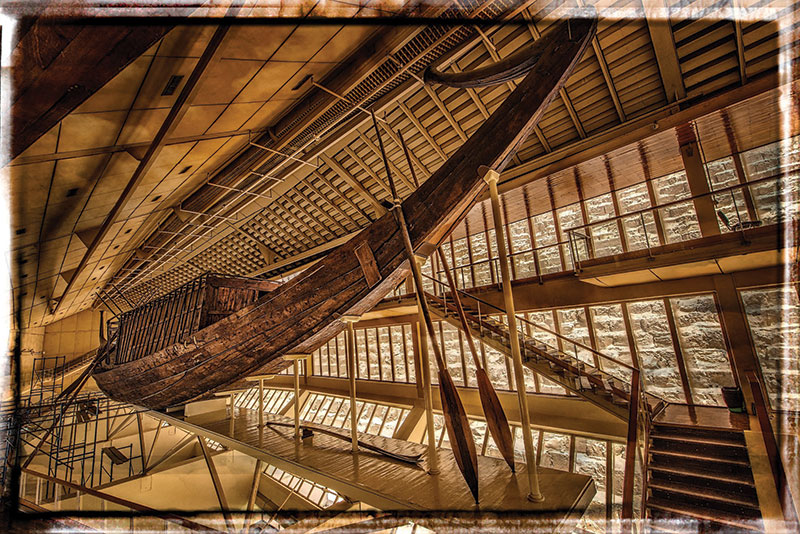 “Explore the routes to Punt, open the roads to the Myrrh-terraces, and lead an expedition on water and on land to bring exotic goods from the God’s Land to this god who created her beauty.” 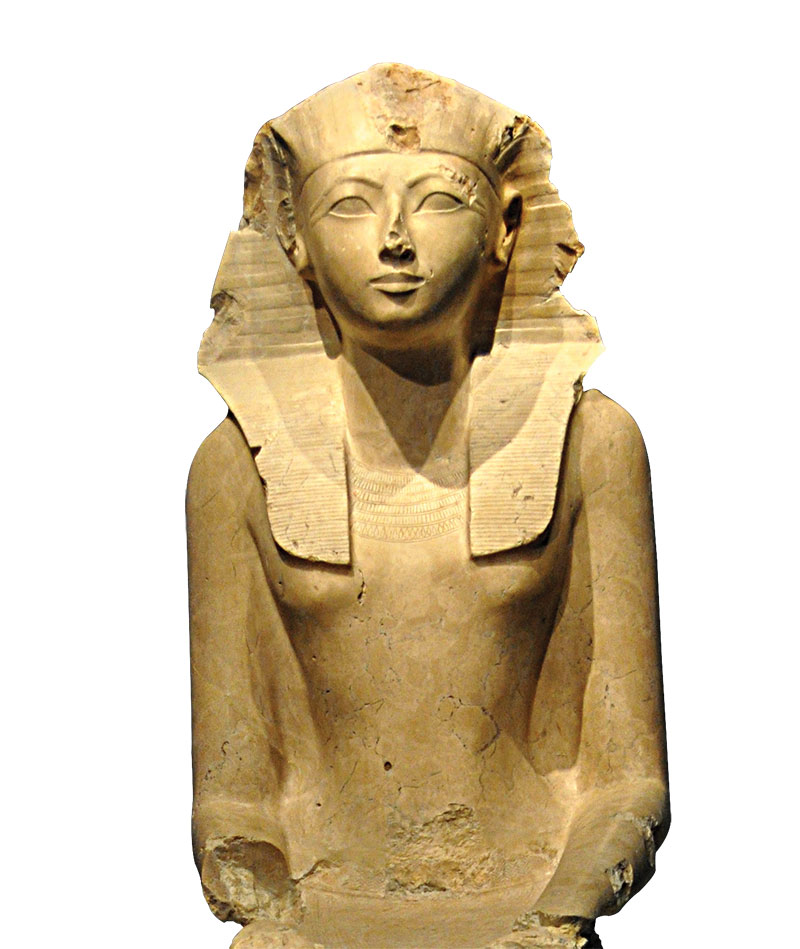 The most famous Egyptian sailing expedition was commanded and devised by queen Hatshepsut of the Eighteenth Dynasty, who ruled by the name of Maatkare Hatshepsut between 1490 and 1468 BC over the Upper and Lower Egypt. People experienced—during her 22-year reign—one of the longest periods of peace and economic prosperity. She restored commercial routes and commissioned the construction of countless buildings; among which, her Mortuary Temple stands out in the Deir el-Bahari complex, located at the banks of the Nile; it is currently considered one of the architectural wonders of ancient Egypt.

Hatshepsut was King Thutmose I and the Great Royal Wife Ahmose’s first and only daughter; when her father died, she was supposed to inherit his position by lineage and by the express will of the pharaoh. However, this proved an impossible right to claim because there was a belief that the gods had proclaimed that the position of a king could only be held by men. Hatshepsut thus married her stepbrother Thutmose II, assuming the title of queen and principal wife for 15 years until the death of her spouse. A son of the king and a concubine, named Thutmose III, was to follow in succession; however, he was barely a child, and Hatshepsut reigned as regent. In the year 1437 BC, she self-crowned as Pharaoh, marking the beginning of an unprecedented and successful reign, considered one of the brightest episodes in the history of ancient Egypt. 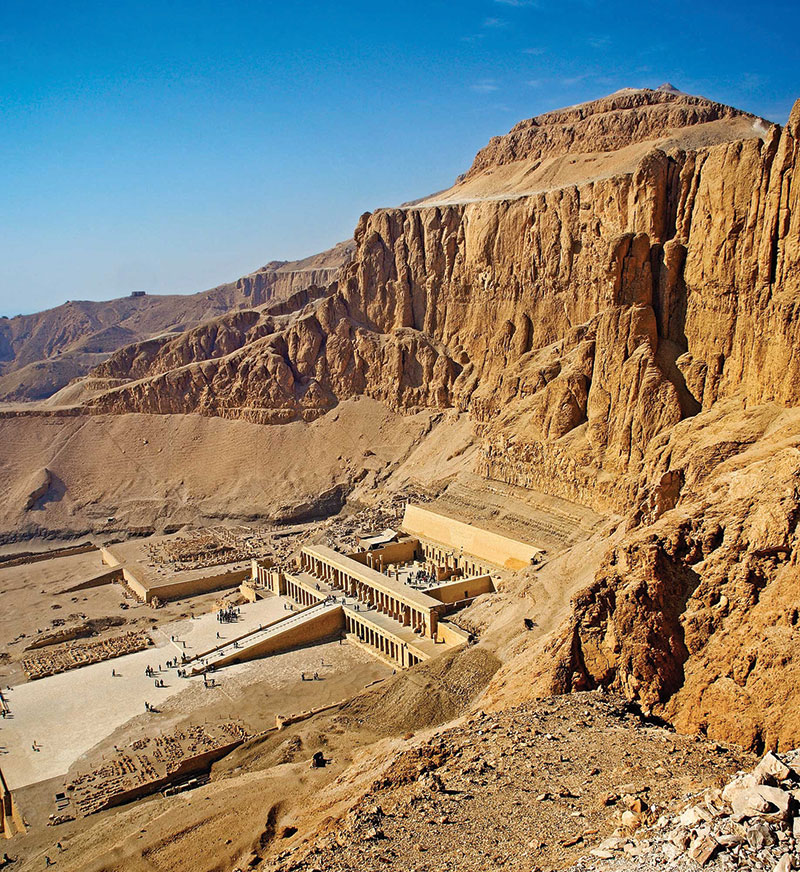 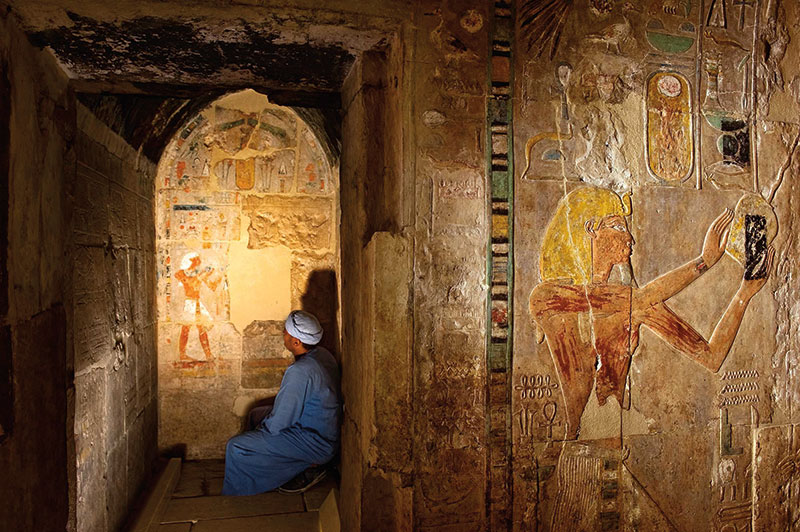 The shrine of Amon-Ra, in Thebes, Egypt. 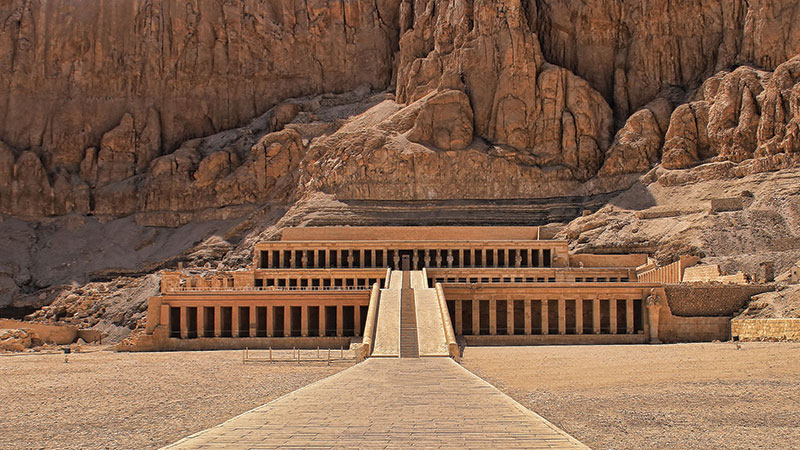 Maritime Expedition to the Land of Punt

For at least 200 years, sporadic expeditions to the Land of Punt were carried out; its exact location is unknown, although there are theories that place it on the coasts of Somalia. This was a legendary site, deeply rooted in Egyptian culture, to which many stories were dedicated. The most famous and best documented of these voyages was the one led by the pharaoh queen Hatshepsut. In the Deir el-Bahari complex, the “woman king”—as she was also known—ordered an exhaustive record of the voyage detailing the experiences of the expedition to posterity.

According to those records, during the fifth year of her reign, Hatshepsut sent five ships—known as kebenit—which could be sailed and paddled, to the Red Sea across the Wadi Tumilat canal, down the river Nile. The journey lasted several months until finally reaching the shores of Punt. Decoration on the walls are testament that the sailors were very well received by King Perahu and his peculiar wife, depicted as obese and deformed, accompanied by their three children. On their way back, their ships brought the treasures they acquired through an exchange with the inhabitants of Punt: myrrh and ebony trees to transplant, among others, precious woods, animals, skins, cosmetics, perfumes, jewelry, ivory, myrrh resin and the precious incense, which is attributed as the main reason for the expedition, since it was the primary offering to the god Amon, and Hatshepsut had proclaimed herself as his legitimate daughter. In one of the scenes of the temple reliefs, the God Amun refers to Hatshepsut in this way: “You are a king, who takes possession of the two lands, Hatshepsut—begotten by Amun.”

After her death, her successors tried to condemn her to oblivion unsuccessfully; her achievements—her existence—continue to intrigue researchers, who identified her mummy only in 2007, lost for centuries. Writers have also been interested in unveiling this mystery; among the books dedicated to her are: Hatshepsut, From Queen to Pharaoh of Egypt by Teresa Bedman and Francisco J. Martín Valentín; Hatshepsut, The Mysterious Queen, written by the great Egyptologist Christiane Desroches-Noblecourt or Child of the Morning by Pauline Gedge.0 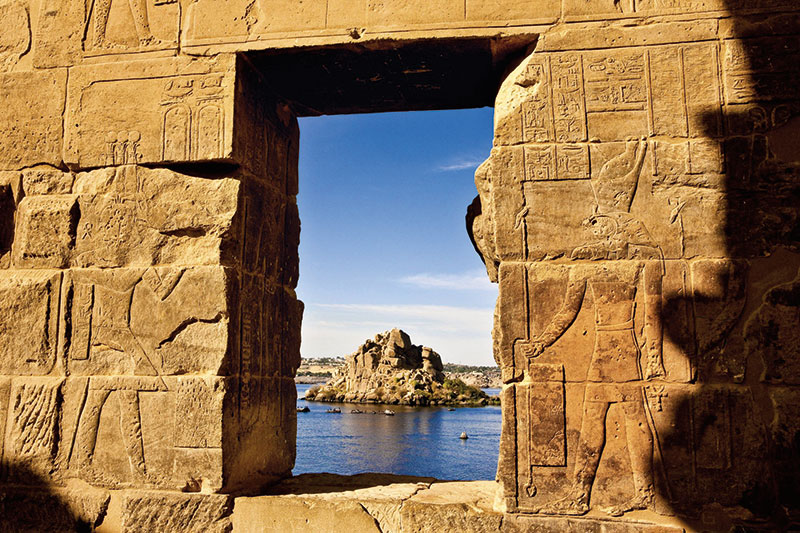 View of the Nile River from the Philae Temple in Aswan, Egypt. 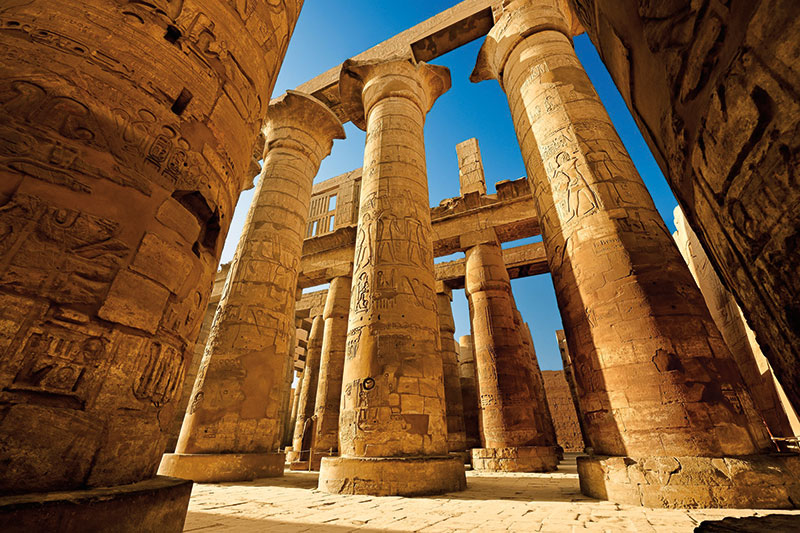 The temple of Karnak, in Thebes, dedicated to the God Amun-Ra.